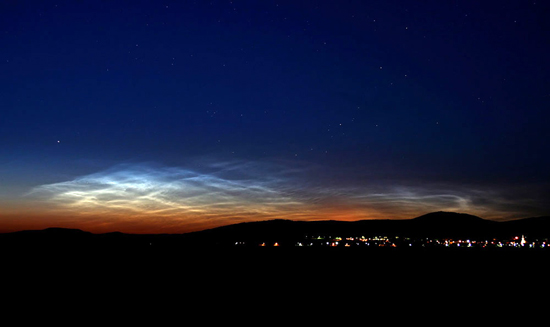 Image above: This image shows one of the first ground sightings of noctilucent clouds in the 2007 season. Credit: Veres Viktor of Budapest, Hungary taken on June 15, 2007. The first observations of these "night-shining" clouds by a satellite named "AIM" which means Aeronomy of Ice in the Mesosphere, occurred above 70 degrees north latitude on May 25. People on the ground began seeing the clouds on June 6 over Northern Europe. AIM is the first satellite mission dedicated to the study of these unusual clouds. These mystifying clouds are called Polar Mesospheric Clouds, or PMCs, when they are viewed from space and referred to as "night-shining" clouds or Noctilucent Clouds, when viewed by observers on Earth. The clouds form in an upper layer of the Earthâs atmosphere called the mesosphere during the Northern Hemisphereâs summer season which began in mid-May and extends through the end of August and are being seen by AIMâs instruments more frequently as the season progresses. They are also seen in the high latitudes during the summer months in the Southern Hemisphere.