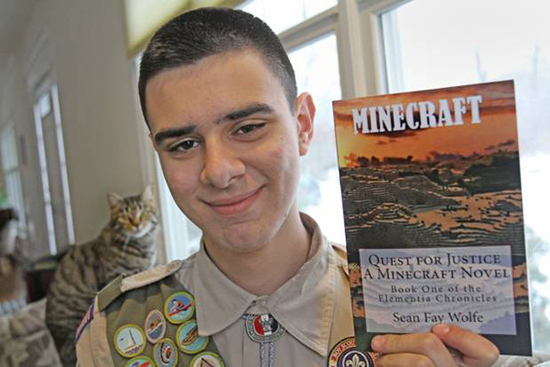 Sean Fay-Wolfe, an Eagle Scout from Troop 1 in Kingston, RI, recently published his first novel, “Minecraft:Quest for Justice”, an action-adventure novel set in the world of the popular video game Minecraft.

The novel tells the story of a player named Stan who has never played the game before. He learns how to play the game while making many new friends, but he soon realizes that the older players of the game look down upon the newer players as second-class citizens. When Stan decides to take a stand against this injustice, he ends up on a quest to lead an uprising against the prejudiced older players and their tyrannical King.

Sean aspires to be an author, but has many other interests including programming various popular games on the amateur gaming website Scratch under the name “Diamond Axe Studios”.

He became an Eagle Scout in September 2012 and recently earned the Den Chief Service Award after five years of being a Den Chief.