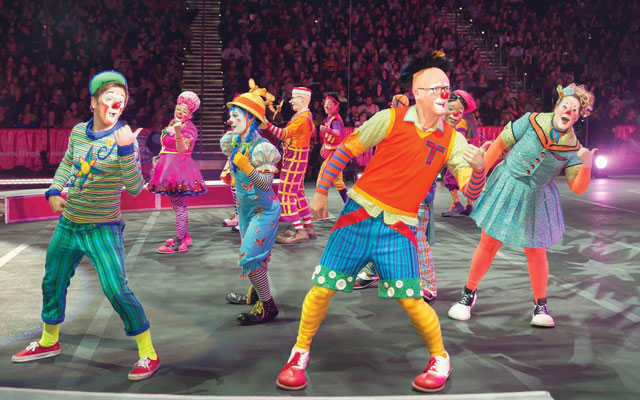 Taylor Albin is having a lot of fun. Dressed in an outfit so colorful it looks as if he walked through a rainbow, the wacky-haired Ringling Bros. clown is performing before a group prior to the big show, and the laughter is deafening.

During a routine involving a strength machine, Albin encourages a little girl to try her luck by striking the device with a huge mallet. She gives it her best shot, sending Albin’s companion flying out of his pants while the audience howls.

Albin is all smiles. Making people laugh is his job.

That Albin works for Ringling Bros. and Barnum & Bailey Circus is no surprise to all who know him. Growing up in Texas, Albin attended the circus whenever it came to town.
“I remember seeing the clowns and thinking, ‘Wow, they bring joy and laughter all across the country. I want to do that someday,’ ” he recalls.
As a teen, Albin honed his clowning skills by putting on shows for church youth groups and at his mother’s daycare center. He studied business in college but still dreamed of becoming a circus clown.

In 2009, Albin learned that Ringling Bros. was holding open clown auditions in New York City, so he tried out. He was invited to join the show a year later, and today Albin is the Boss Clown with the Red Unit, one of three Ringling Bros. and Barnum & Bailey shows that travel the United States each year.
“I work with 12 of the funniest people on Earth, and sometimes that can be a little crazy,” Albin, 27, says. “I make sure we’re making our cues, that we look good and that all the props are ready. Of course, at the end of the day, you have to make sure you’re having fun.”

Get Your Clown On 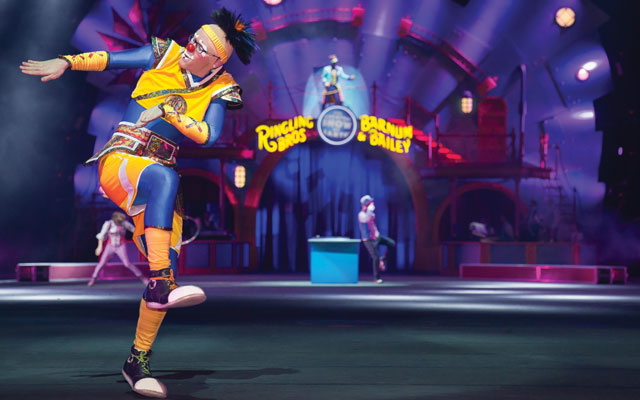 Ringling Bros. and Barnum & Bailey Circus has its own clown school. There are several other clown schools across the United States, such as New York Goofs in New York City and Circus Center in San Francisco.

“There are also a lot of circus-arts programs, as well as regional clown clubs that entertain during parades and other local events,” Albin says. “So you really can get started in clowning at a young age.”

At the Ringling Bros. and Barnum & Bailey Clown College, recruits are taught the basics such as juggling and acrobatics. Then comes on-the-job training.
“We continue to teach you through your first year on tour,” Albin says. “You work with Ringling Bros. clowns, but you also attend workshops that teach new skills and enhance old ones.”

Also important is a clown’s individual look. Recruits learn how to design their personal makeup, and how to put it on and take it off.
Large circuses such as Ringling Bros. and Barnum & Bailey play huge arenas around the country, and a clown’s makeup must be as visible to those sitting in the back as it is to those in the front row.

“That’s one big reason why we paint our faces,” Albin says. “We have these big, exaggerated expressions, and when we smile they come to life for everyone.”
Keys to the Show

The typical circus show lasts about two and a half hours, and clowns play an important role. Albin and his crew perform two spotlight acts — recently, a soap gag featuring a lot of slippery suds and a spoof of America’s Got

Talent called “Clowns Got Talent” — but they also participate in all of the show’s production numbers.

“P.T. Barnum said clowns are the pegs on which the circus is hung, and that is so true,” Albin says. “We really are woven in and around the entire show. In fact, we even have a pre-show that starts one hour before every show. This is the one chance people have to go onto the arena floor, try on vintage costumes and meet the stars, and we clowns are there the whole time. That’s one of my favorite activities.”

Circus clowns have specific duties during each show, but they are actually on call the entire time.

“We have to be able to cover different parts of the show if things don’t quite work out,” Albin explains. “For example, there was an act that featured a cart pulled by a donkey. One show, the donkey wasn’t able to perform, so the clowns got to go out and pretend to be the donkey.”

Being a circus clown can be great fun, but there are challenges. The circus travels nearly 11 months a year, which is a long time for performers to be away from friends and family. However, being a circus clown also presents some unique opportunities. Clowns get to travel the country and work with some amazing people. Including an aerialist from China who competed in the 2008 Summer Olympics, Albin works with performers from more than 17 different countries.

“Experiencing their cultures and their traditions is incredible.”

What to Expect: Circus clowns are specially trained to entertain audiences while both in the spotlight and around other acts. They also help out when something doesn’t go as planned during a show.

Job Outlook: The Ringling Bros. and Barnum & Bailey Circus is the largest touring circus in the United States, with three traveling units. Additional job opportunities for clowns can be found with other circuses, including Cirque du Soleil, and with regional clown organizations, which entertain audiences during parades and other events.