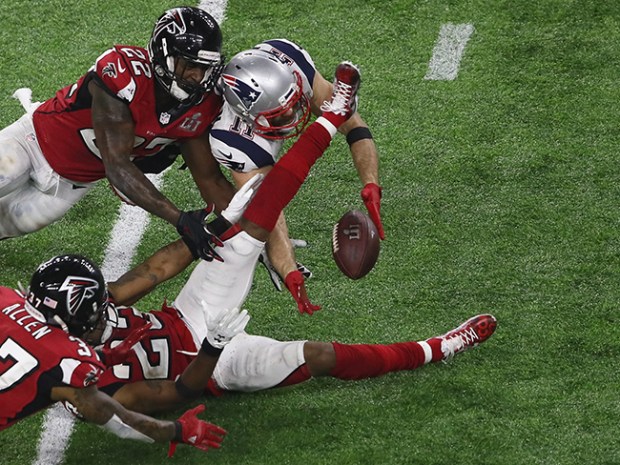 The greatest comebacks in National Football League history were fueled by talent, guts and maybe some luck.

If you play sports long enough, you’re going to find yourself behind on the scoreboard
somewhere along the way.

Like all champions, the Patriots didn’t give up. The result was the biggest comeback in Super Bowl history.

New England became the seventh team in the history of the NFL to win a game after trailing by 25 or more points. Here’s a look at all seven fantastic finishes. 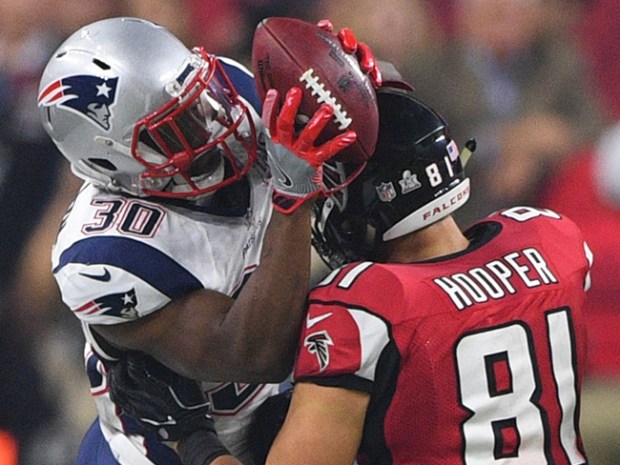 HOW IT HAPPENED: Atlanta was leading 28-3 after quarterback Matt Ryan threw a 6-yard touchdown pass to running back Tevin Coleman with 6:29 left in the third quarter. It looked like the Falcons were on their way to a blowout victory. The Falcons were still winning 28-12 with 8:31 left in the game when they fumbled the ball back to New England, and everything changed. Thanks in part to a miraculous catch by wide receiver Julian Edelman, the Patriots tied the game with two touchdowns and two successful two-point conversions in the last six minutes of regulation. New England won in overtime on a James White TD run.

QUOTABLE: “Everybody was saying, ‘All we need is one play to spark this whole team.’ We just had each other’s back. At no point did anybody blame anybody or anybody’s head was down. It was just, literally, everybody fighting and grinding.”
— New England Patriots safety Duron Harmon 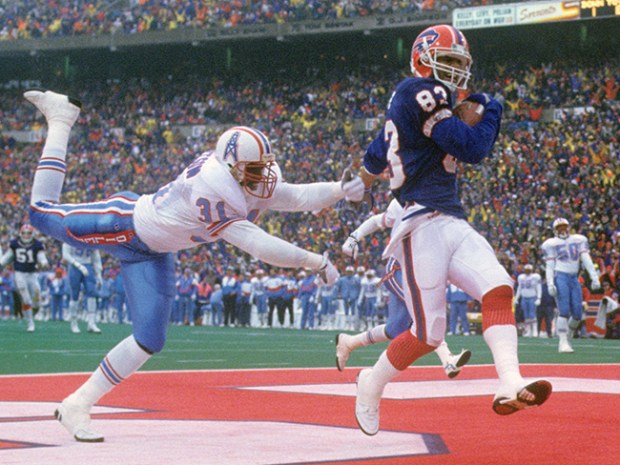 Andre Reed hauls in one of his three touchdown catches against Houston in the game now known simply as “The Comeback.” (John Biever/Sports Illustrated/Getty Images)

HOW IT HAPPENED: Houston led this game 35-3 early in the third quarter. Thirty-five to three! Then Buffalo quarterback Frank Reich got hot, leading the biggest comeback in NFL history by throwing for four second-half touchdowns. The Bills eventually won on a field goal in overtime. What makes this game more amazing is that Reich was Buffalo’s backup quarterback. He was playing only because starter Jim Kelly had injured his knee a week earlier. But what really makes this game even more amazing is that Reich had also led the biggest comeback in college football history. When he was a backup at the University of Maryland, Reich came off the bench with his team losing to the University of Miami 31-0. But Maryland and Reich rallied to win the game 42-40.

QUOTABLE: Buffalo’s third-string QB, Gale Gilbert, gave Reich a pep talk at halftime. “I was sitting at my locker and Gale said, ‘I know you were part of a comeback like this in college, so you know it can be done.'”
— Reich

3. Luck Would Have It 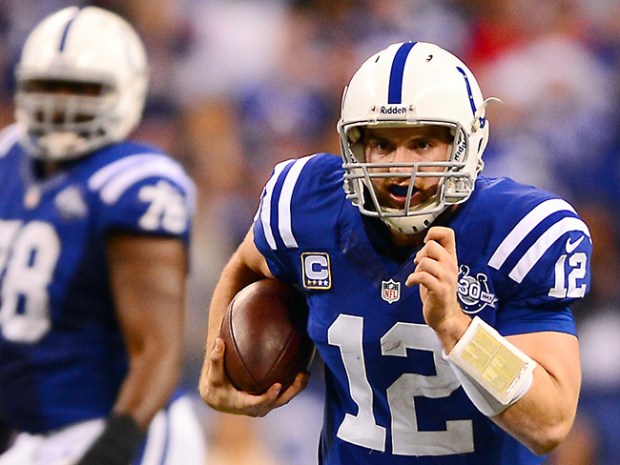 A little Luck can go a long way, as Andrew helped his team win with both his arm and his legs. (Andrew Weber/USA Today Sports)

HOW IT HAPPENED: Things weren’t looking good for the Colts when they trailed KC 38-10 in the third quarter. Young quarterback Andrew Luck had never won a playoff game, and he wasn’t playing very well in this one. But Luck was definitely on the Colts’ side when running back Donald Brown fumbled the ball near the end zone only to have it bounce off a player’s helmet and right into the arms of Luck, who plowed forward for a short touchdown run. Luck threw three TD passes in the second half, including a 64-yarder to receiver T.Y. Hilton with less than five minutes to go that ended up being the game
winner.

QUOTABLE: “He (Luck) kept telling us, even at 38-10, ‘We’re going to win this game.'”
— Indianapolis offensive lineman Anthony Castonzo 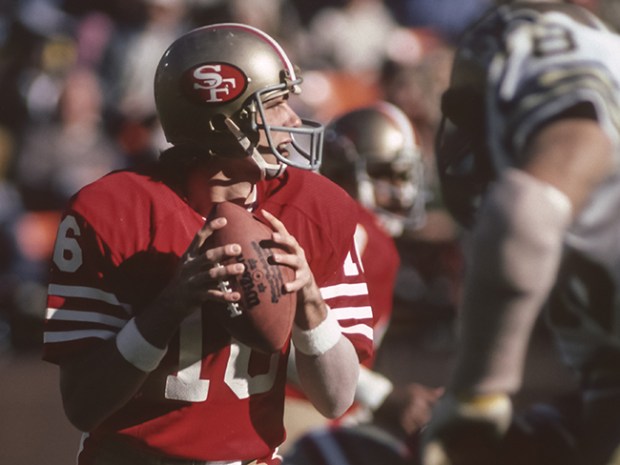 HOW IT HAPPENED: The Saints were winning 35-7 at halftime. Game over, right? Wrong. A quarterback named Joe Montana — in just his second NFL season — led the 49ers to the greatest comeback in NFL regular-season history. Montana scored on a 1-yard run, and completed a 71-yard touchdown pass and a 14-yard touchdown pass to kick-start the comeback. San Francisco tied the game on a rushing TD by Lenvil Elliott before winning on a field goal in overtime. During 16 NFL seasons, Montana would lead his team to 31 fourth-quarter comebacks.

QUOTABLE: “I think that was an experience for all of us. I’ve never been associated with a game where a team came back so strong.”
— San Francisco 49ers head coach Bill Walsh 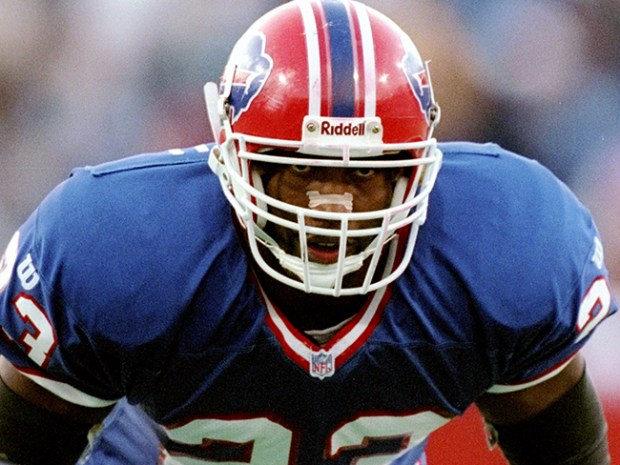 Antowain Smith keeps his focus, and his team kept its cool down the stretch against the Colts. (Rick Stewart/AllSport via Getty Images)

HOW IT HAPPENED: This time, Buffalo didn’t wait until the second half to begin its comeback. After falling behind 26-0 in the second quarter, the Bills scored 10 points before halftime to seize some of the momentum. The second half was crazy. Quarterback Todd Collins threw two touchdown passes and running back Antowain Smith ran for two touchdowns to give Buffalo a 37-29 lead. But Indianapolis didn’t quit. The Colts scored a touchdown with 14 seconds left in the game, but they failed to convert a two-point conversion that would have tied it up. Still, the game wasn’t over. The Colts recovered an onside kick, only to have two long desperation passes fall incomplete.

QUOTABLE: “This was a tremendous win for our team and for our egos. Coming back from 26 points down was a little scary.”
— Smith 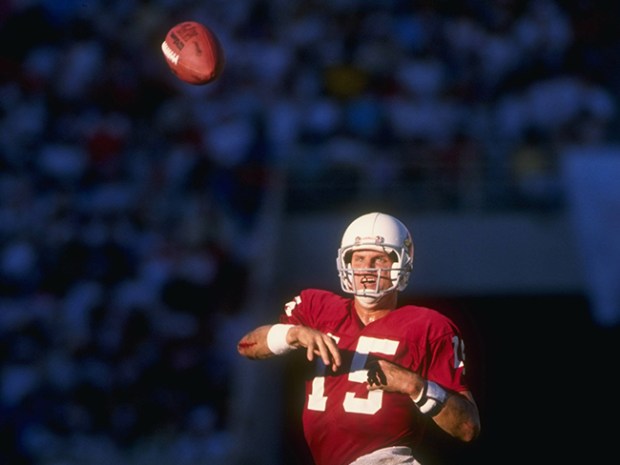 Neil Lomax never gave up, even though his team was losing big in the fourth quarter. (Michael Minardi/Getty Images)

HOW IT HAPPENED: The Cardinals’ comeback from a 28-3 deficit wasn’t the biggest in NFL history, but it was the latest in NFL history. St. Louis scored an incredible 28 points … in the fourth quarter. Neil Lomax threw three touchdown passes, and the Cardinals returned a fumble 23 yards for a touchdown to bring St. Louis back from the brink of defeat. Tampa Bay almost forced overtime but missed a 53-yard field goal as time expired. By NFL standards, not very many people saw this game live: There were only 22,449 fans in attendance. That’s because everyone knew the team was about to leave town. The Cardinals moved to Tempe, Arizona, after the season and became the Arizona Cardinals.

QUOTABLE: “If you talk about an all-time comeback, this is it. We’ve come back from big deficits before, but never 28-3 in the fourth quarter.”
— Lomax 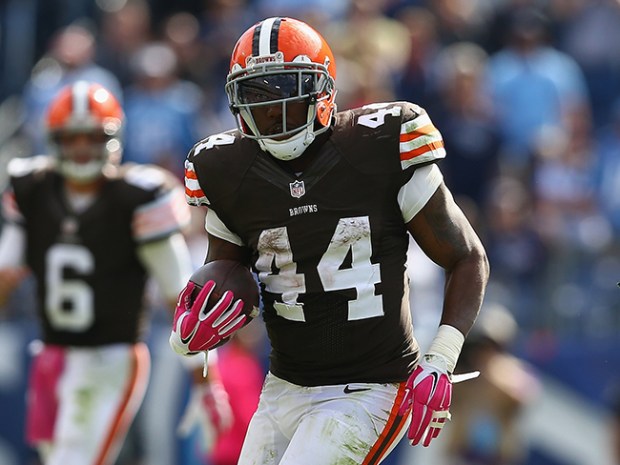 Ben Tate breaks into the open field against the Titans. This happened a lot, as Tate ran for 124 yards. (Andy Lyons/Getty Images)

HOW IT HAPPENED: Tennessee jumped out to a 28-3 lead, thanks in part to two touchdown passes from Charlie Whitehurst, who entered the game when the starting QB left with an injury. Cleveland scored its first touchdown with 12 seconds left in the first half and then dominated the second half. The Browns scored on a field goal, a blocked punt that went out of the back of the end zone for a safety, and two touchdown passes from Brian Hoyer. The last score was a 6-yard pass to receiver Travis Benjamin that gave the Browns the lead for good with 1:09 left in the game.

QUOTABLE: “It’s always great to win, but to win coming back and know that you battled your butt off is a great feeling.”
— Hoyer

5 Comments on The 7 Greatest Comebacks in NFL History