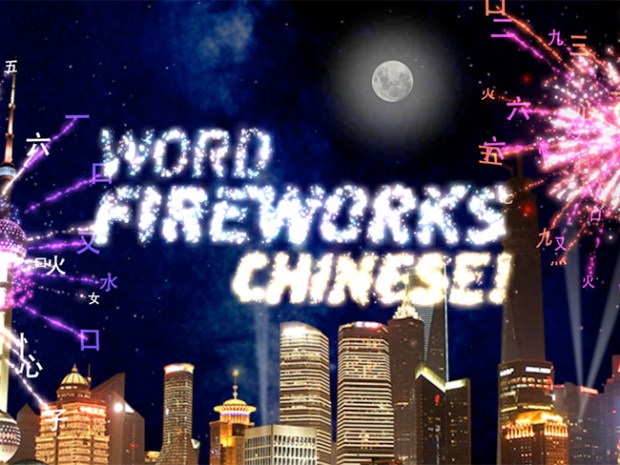 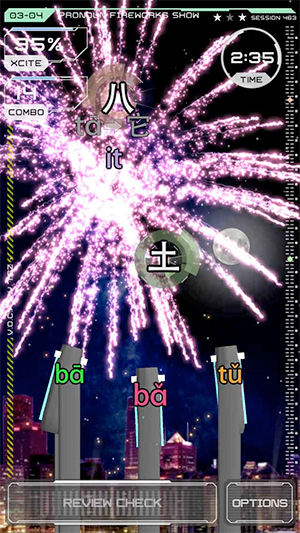 Word Fireworks teaches you the basics of some of the world’s more difficult language, including Chinese, Korean, Japanese and Hebrew. Here’s the deal. The game makers of these mobile offerings reward you with showers of fireworks when you learn and write words or phrases. The results are so beautiful, you’ll want to keep winning and learning to see more colorful explosions.

In Word Fireworks, there are 100 kinds of fireworks to unlock as rewards, including Chrysanthemums and Donut Kebabs. If you like, you can create your own custom fireworks.

I checked out the Mandarin Chinese language version, which has a sci-fi story attached. Your commander is Major Pauline Glott, who tells you that you can help scientists talk with aliens who have arrived in flying saucers. They are ‘edupathic,’ which means they learn when they sense humans are learning.

Before you start the game, you join a group called S.P.A.R.K., Students Promoting Alien Relations With Fireworks. During the tutorial with Major Glott which takes place in the skies of Shanghai as a the background, you’ll learn that the meaning of a word in Chinese changes depending on your tone of voice. So ‘ma’ might mean ‘mother’ or ‘hemp.’ You’ll practice pronunciation — and explode a lot of fireworks. If you don’t do well on the first time out (I didn’t), you can try again.

For the nice price of $2 for each language game, you really can’t go wrong. Word Fireworks is available on the App Store and Google Play.