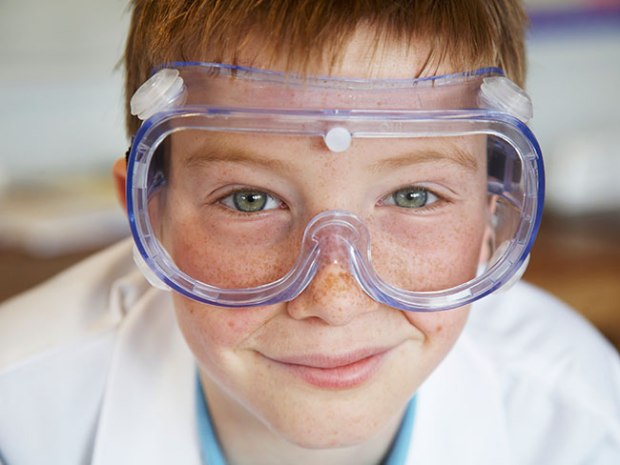 Using common objects around the house, you can demonstrate cool scientific laws. Here’s how: Fill two identical glasses with water. Add two tablespoons of salt to the water in one glass and stir well. Add a few drops of food coloring to the water in the other glass.

Gently pull the paper out from between the glasses. The colored water and the salt water will remain separate. Salt water is heavier than colored water, so the two stay separate as long as the boundary between them isn’t disturbed. Try turning the two glasses over, though. The heavier salt water will now be on top, so it will flow down and mix with the colored water.

A Can That Can “Walk” Place an empty aluminum can on its side on the floor. Blow up a balloon and tie a knot in the end. Rub a tissue back and forth on the balloon.

When you put the balloon near the can, the can will start rolling toward the balloon.

When you rub the balloon with a tissue, the balloon gets a negative electric charge of several thousand volts. When you put the balloon near the can, electrostatic induction affects the molecules in the metal. The outside of the can gets a positive charge, so it is drawn toward the balloon and starts rolling in that direction.

A Candle That Sucks Water Place a candle upright in the middle of a saucer. Fill the saucer with water. Light the candle. Place a glass over the candle. When the flame goes out, the water in the saucer will get sucked into the glass. Hold the mouth of a black trash bag in one hand. Use a hair dryer to blow hot air into the bag.

Seal the mouth of the bag with tape. Tie a long piece of string around the tape so you can hold it. Take the bag out into the sun. The bag will rise slowly into the air. (It’s best to do this trick in an open area on a windless day.) Since the bag is black, it absorbs heat from the sun. That heat makes the air inside the bag expand and become lighter. When the bag and the air inside are lighter than the surrounding air, the bag starts to rise. Punch a hole in a clear plastic bottle two inches from the bottom. Put your finger over the hole, fill the bottle with water and cap it to keep it from draining out.

Darken the room and cover part of a flashlight with your fingers to make the beam narrower. When you take the cap off the bottle, the water will flow out in an arc. Shine the flashlight at the stream from the side of the bottle opposite the hole. The light will bend with the arc and create a bright glow where the water hits the sink. When the light in the stream strikes the boundary between the water and air, much of the light is reflected back into the stream. The light continues this internal reflection all along the arc formed by the falling water. The same principle is used to transmit light signals through flexible optical fibers.

Reading Through an Envelope With a black felt-tip pen, write a three-letter word in large letters on a white piece of paper. Place the paper in a brown envelope, and insert that envelope into a white envelope. The writing on the paper should now be impossible to read.

Get a piece of dark construction paper or tear out a page from a magazine that is printed on both sides. Roll up the paper into a four-inch-long tube. When you hold the tube against the envelope, you’ll be able to read the writing inside. Usually you can’t read the writing inside an envelope because of the light reflected off the envelope’s white surface. But the tube blocks that reflected light, so you see only the light coming through the envelope. Find a glass bottle that has a mouth slightly smaller in diameter than an egg. Pour some hot water into the bottle (be careful!), shake it vigorously and empty the water.

Peel a soft-boiled egg and place it on the mouth of the bottle. Leave it there for a while and it will get sucked inside. The vapor from the hot water drives the air out of the bottle. Once the egg seals the top of the bottle, the air can’t get back in. As the water vapor cools, it turns back into water, causing the pressure inside the bottle to drop. The higher pressure of the outside air pushes the egg into the bottle. Dab a little shampoo on the blunt end of a wooden toothpick.

Drop the toothpick in a pan of water. The toothpick will start moving in the direction of the sharp end.