Grab a piece of paper and a pencil and get ready to learn how to give your friends a few yucks and chuckles. This is a lesson in how to draw caricatures.

Caricatures are simplified portraits of real people, intended to be funny.

This won’t be easy. Drawing caricatures takes roughly the same skill as threading a needle while whitewater rafting. But like anything difficult, there are tricks you can learn to make it easier. And, if you want to get really good, follow these three time-tested, can’t-miss, slam-dunk steps to success: 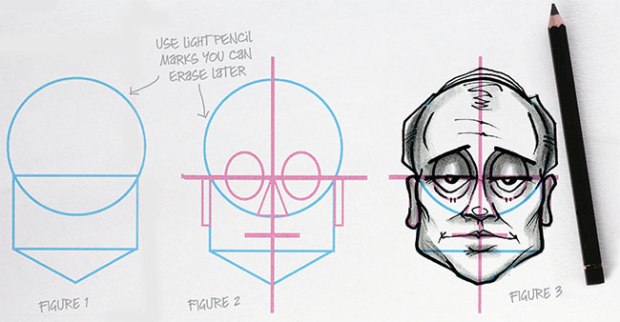 When artists analyze a subject, they look for basic shapes. For instance, the human head can be divided into three parts — the skull, the jaw and the chin. These three parts can be drawn using a circle, rectangle and triangle.

The face, too, can be boiled down to simple shapes.

Notice that the head in Figure 1 is not unusually wide or long. The face in Figure 2 isn’t out of the ordinary either. This person is dull, bland, blah and nondescript.

Add Figure 3’s bad hairdo and you’re on your way to funny.

STEP 2: RECOGNIZE WHAT IS NOT TYPICAL

All good caricaturists share the ability to see what is not typical about a person.

Let’s practice this type of observation. We’ll choose as our subject someone who was definitely not typical, someone we all recognize, someone known and loved the world over. Please put your pencils down and give a warm welcome to the 16th United States president, Abraham Lincoln! 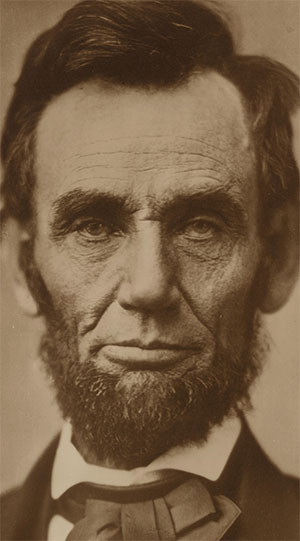 Compare Abe’s photograph with our “typical” head and face in Figure 2. Notice anything that is not typical?

Here’s a hint: Place your hand over the top part of Abe’s head so that only what’s below the nose can be seen. Look at the jaw and chin. Keep looking.

O.K., imagine a “typical” skull that would match this jaw and chin.

Whoa! Isn’t the top part of Abe’s head HUGE? His brain pan is so big, it could star in its own science-fiction movie.

Look for other differences:

Getting the hang of this? If so, you have taken the first steps toward becoming a caricaturist.

Your next practice assignment: Look at people around you and try to figure out how they are not typical.

(Note: BL warns its readers not to use their new skills for bad purposes. For instance, under no circumstance should a Boy Scout draw his Scoutmaster to look like Pedro the mailburro. Unless he can make the caricature really funny.) 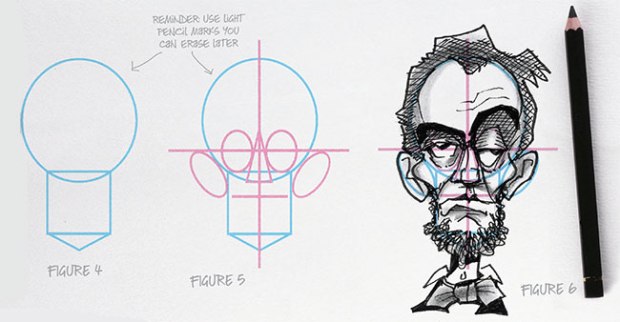 Now we’ll draw a caricature of Abraham Lincoln. Begin by making a big circle that represents his size 3XL skull. Draw a scaled-down rectangle for Abe’s jaw. The triangle for the chin should match the jaw. (Figure 4)

Add the shapes of Abe’s face. Place the eyes low on the skull to emphasize his humongous forehead. The triangle for the nose should be fairly typical. Since his ears are rounded, represent them with half circles. Shift the lower lip to the left. Finally, sketch a few lines for the shape of Abe’s hair. (Figure 5)

Next, sprinkle your drawing with details. Make the eyebrows thick and heavy. Put the eyelids at half-mast to give the eyes a world-weary appearance. Place some natural waves in the hair and tight squiggles in the beard. Now, shade in the dark areas. (Figure 6)

This is how history remembers Lincoln—worn down by war, sad and solemn, thinking great thoughts. We’ve captured him perfectly for, say, a sculpture. 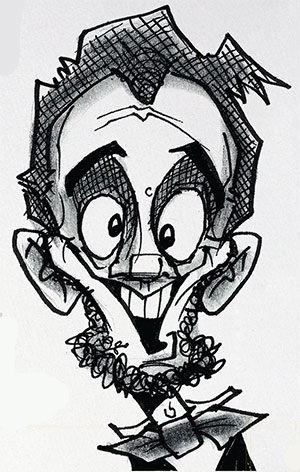 But caricatures are supposed to expose a person’s personality. Folks of his time said Abe didn’t look like his photographs — the pictures couldn’t capture his lively expressions.

We have to add some humor.

So here’s a quick lesson in cartoon expressions. Once you’ve gotten the hang of drawing a likeness of Abe, add some crazy eyes and a wild mouth to give him a wide variety of looks and moods. Use the ones shown here as examples or inspirations.

Now you have the skills you need to draw exaggerated caricatures of Abraham Lincoln. You can show him as he really was — full of life.

If your first drawings don’t turn out well, try again. The more you practice, the more you’ll improve.

Once you get good at Lincoln, use what you’ve learned to draw caricatures of other U.S. presidents. Draw your parents. Your siblings. Your friends.

Draw your teachers, but do so with all the love and respect that their high positions deserve.

Exaggerated pictures of people first appeared on cave walls. As long as people have been drawing, there have been portraits with buggy eyes and big noses.

But caricaturing is believed to have begun in the mid to late 1400’s — the same time the printing press was invented. Suddenly, knowledge could be widely and cheaply distributed. One result of this information revolution be-came known as the Reformation.

Exaggerated portraits didn’t have a name until the late 1500’s. That’s when an Italian art school run by the Carracci family developed a fast style of informal portraits called “caricature.” The word comes from caricare, which means “to overload” (such as to overload a wagon). 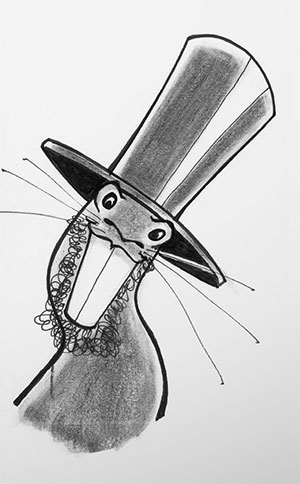 Abraham Lincoln loved humor. Folks of his time said Abe was so funny, he could make a cat laugh.

Most everyone admires Lincoln now — some experts rate him the best U.S. president ever. But during the Civil War, many people hated Abe. Leaders in the South considered him a threat to their way of life. Leaders in the North brushed him off as a country bumpkin unﬁt for his job.

As a result, cartoonists from both South and North took aim. Old Abe became one of the most caricatured people in history.

So by drawing Abe, we’re following a long tradition.

Plus, it’s fairly easy to draw a likeness of Lincoln. Even if your drawing looks like a naked mole rat, add a beard and stovepipe hat and your friends will say, “Hey, it’s Abe Lincoln!”

9 Comments on How to draw funny caricatures