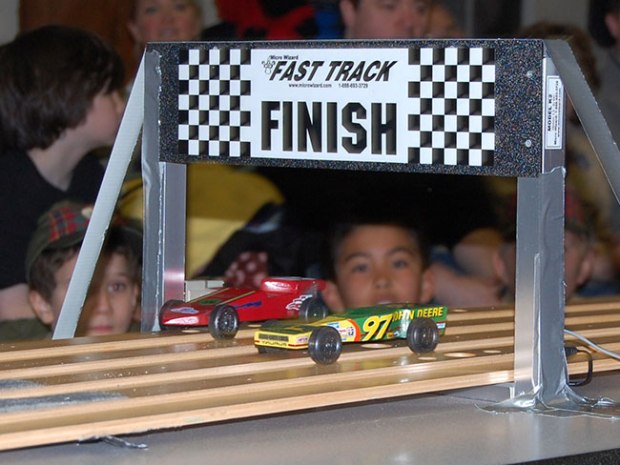 Packs around the country are preparing to hold their annual Pinewood Derby. There are many ways to make your Pinewood Derby car go faster. Here are some of them.

The possibilities are endless when it comes to picking a shape for your Pinewood Derby car. Before you begin, consider the following general guidelines:

Make the maximum weight. Your car should weigh as much as it’s allowed. In most races, a Pinewood Derby car’s weight is limited to 5 ounces. If your car weighs less than that, add coins or other weights.

You don’t have to strive for the fastest Pinewood Derby car to have fun competing in your Pinewood Derby. But if you and a helpful adult are willing to put in the extra time and effort, these tips are for you.

1. Bake the Block: Start with your block of wood, and before you do anything else, bake it in the oven at 250 degrees for around two hours to remove moisture and make it lighter. This will allow you to place more weight to the rear of the Pinewood Derby car where you actually want it.

2. Create the Design: Draw the outline of your Pinewood Derby car on a sheet of paper, cut it out and attach it to your block of wood.

3. Rough Cut the Design: Use a coping saw to cut out the rough shape of your Pinewood Derby car. You can also ask a responsible adult to make these cuts using a power tool.

4. Shape Your Car: Use sand paper to smooth your car’s edges and shape it to your design. An adult can also use a rotary tool or other tool to help you.

5. Sand and Paint the Pinewood Derby Car: Make it smooth to reduce friction and paint an awesome design to make it look great.

Click here for tips on painting your Pinewood Derby car to give it a shiny finish.

6. Install Axles and Wheels: Make sure they are aligned perfectly straight. You can test the alignment of your axles by pushing your car across a smooth floor or table. It should roll smoothly in a straight line.

— Make a Three-Wheeler: Raise one wheel about 1/16 inch higher so it never actually touches the track. Less friction = more speed. Rules vary from pack to pack, so make sure to check your pack’s Pinewood Derby rules to make sure three wheelers are allowed in your race.

— Extend the Wheelbase: The front and rear wheels should be as far apart as possible. Again, make sure this is allowed in your race.

7. Create Glue Holes: Glue the axles firmly in their holes to ensure that they stay perfectly placed, but make sure you don’t get glue on your wheels.

8. Add Weight: Remember to make your Pinewood Derby car as heavy as the rules allow. In general, it’s best to place weight to the rear of your car because a heavier rear increases speed.

9. Lubricate the Wheel Well: Add graphite or another dry lubricant to reduce friction. The less friction between the body and wheel, the better.

And finally, remember the No. 1 rule of a Pinewood Derby is that it’s supposed to be fun. While you should always strive to do your best, don’t get caught up in winning or having the fastest car. Just enjoy the ride.

50 Comments on How to Make a Fast Pinewood Derby Car