At Summit High Adventure Base in upstate New York (not to be confused with the Summit Bechtel Reserve in West Virginia), Scouts get an introduction to ice climbing in the surrounding Adirondack Park area under the direction of trained climbing instructors. 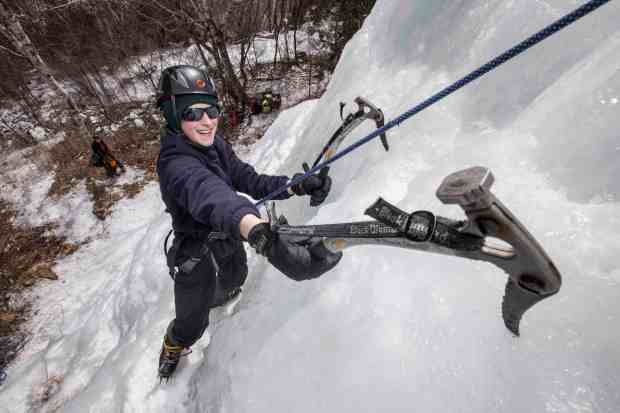 They learn that some pieces of equipment — ropes, harnesses and helmets — are the same as what’s used in rock climbing. Other pieces — boots, crampons and ice axes — are quite different.

“It was definitely really exciting,” says Dunlin Stathis, an Eagle Scout from Troop 154 in Golden’s Bridge, N.Y. “I thought I would have a good time, but I had such a good time.”

At the end of the training session, there were two questions for Dunlin and the other Scouts to answer:

Are you physically strong enough to climb the wall? Are you mentally tough enough to stay calm 30 feet above the ground?

When it comes to successful and safe ice climbing, there are four crucial pieces of gear: 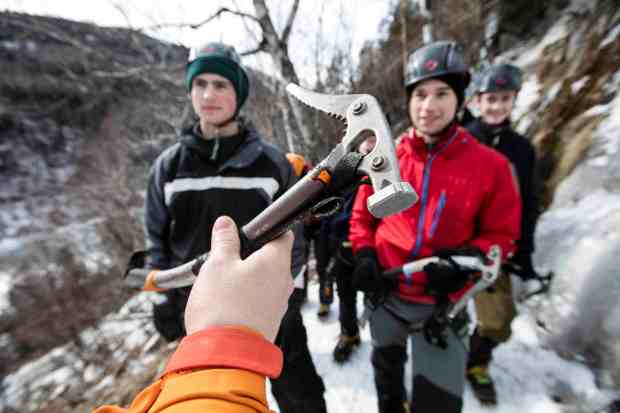 • A helmet, which protects climbers from falling ice and anything that could accidentally be dropped from above by another climber.

• A properly fitted harness, which keeps climbers from falling if they slip on the ice. The harness is attached to a rope that runs through an anchor at the top of the climb, and then runs down to the ground where a belayer and a backup belayer hold it securely.

• A technical climbing boot made of heavy-duty plastic that attaches to a crampon — a metal plate with spikes the climber uses to gain traction on the ice.

• An ice ax, which the climber slams into the ice to keep upright. (Some climbers choose to wear eye protection as well.)

Once the climber is geared up, moving up the wall is like a dance: right arm up, left arm up; right leg up, left leg up. Imagine your body shaped like an “X” with your arms slightly spread and your legs about shoulder-width apart.

Here’s where things can get complicated.

On a novice rock-climbing route, there are easily identifiable handholds you can follow up to the top. 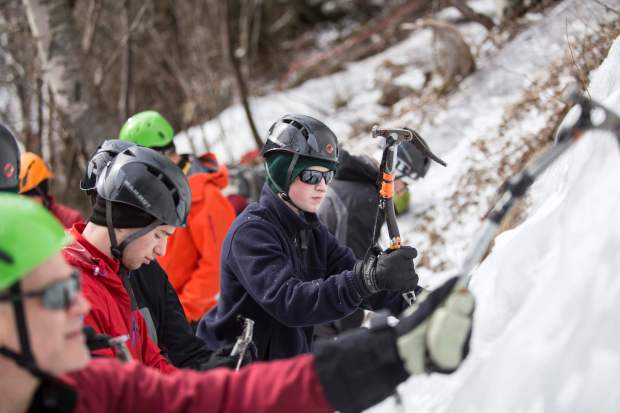 Did we mention these guys are climbing a wall of ice? No handholds.

Instead, ice climbers look for tiny depressions in the ice that make it easier for the ice ax to get a grip. Basically, they extend their elbow out a little away from their face and chop the ax into the ice. If at first it doesn’t stick, they try again until it catches.

“Learning how to set the ice picks correctly was the key,” says Matt Galea, another Troop 154 Eagle Scout. “It took me a couple of attempts to figure it out, but once I did, it was oddly relaxing. Once you get the rhythm correct, everything else comes naturally.”

In the meantime, ice climbers must also manipulate their crampons to do their job. They try to make their feet perpendicular to the ice, which can be tricky because it’s not always easy to look down past your bulky jacket to check on your alignment.

Once it feels right, the Scouts kick in their toes and drop down their heels, creating a platform to stand on.

To reduce the strain on their muscles, ice climbers try to keep their bodies somewhat stretched out, allowing their bone structure to do the job of holding them up. If they find themselves too scrunched, they’ll use their muscles to hold themselves up and they’ll get exhausted fast. 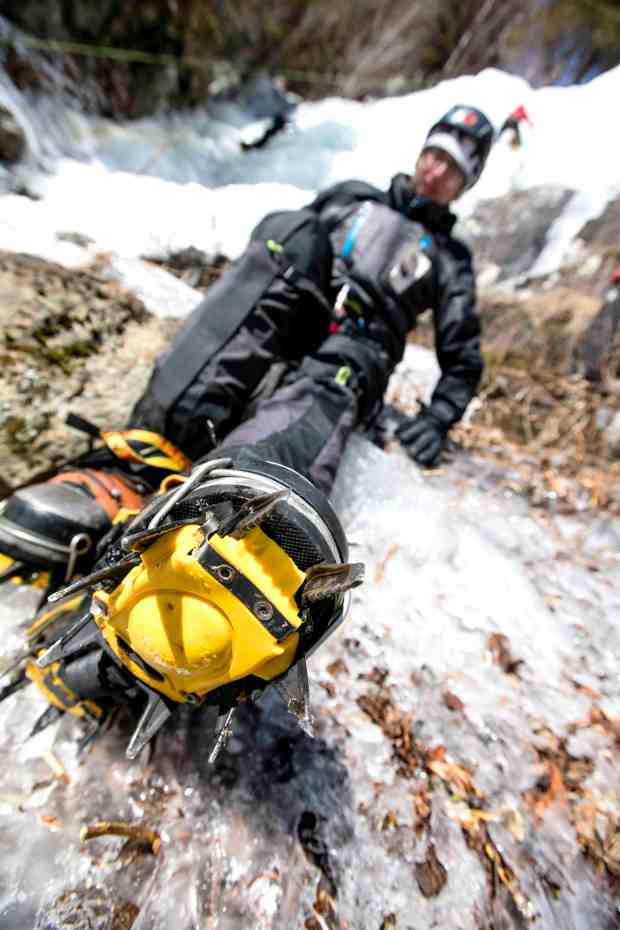 Once you master the rhythm of climbing, the only other test is psychological: The equipment is designed to keep you from falling. Your job is to trust it.

At the beginning of every climb, the climber yells out, “On belay?” When he’s ready, the belayer yells back, “Belay on!” Then the climber announces he is starting his ascent, and the belayer responds, “Climb on!”

At that point, you know you’re safe. The belayer’s job is to keep the rope tense enough to catch you before you fall more than a foot or two, but loose enough to let you climb on your own. The backup belayer is there in case something goes wrong with the main belayer.

It’s a system that’s been improved upon during the last 100 or so years. As long as you and your team are following the rules, you aren’t going to fall.

But, of course, that doesn’t change the fact that you’re climbing up a wall of ice. 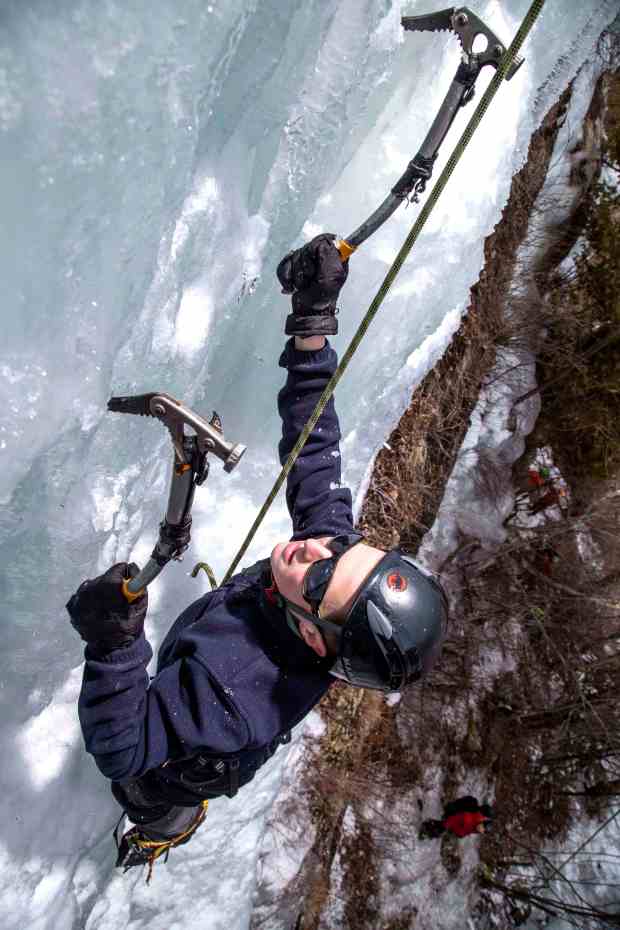 Units with youth who are at least 13 may elect to participate in lead climbing and/or snow and ice climbing with training from a nationally recognized organization that trains climbing instructors.

BSA climbing directors and instructors are not trained in lead climbing or ice climbing.

Climb On Safely is the Boy Scouts of America’s procedure for organizing climbing-type activities. Check it out at go.boyslife.org/climbonsafely

Know Before You Go

WHERE: The Summit High Adventure Base at Curtis S. Read Scout Reservation in Brant Lake, New York, and the surrounding area, operated by the Westchester-Putnam Council

WHEN: January to March

WHAT: The ice-climbing program focuses on the basic concepts and techniques of ice climbing, and does not require any previous climbing experience. In warmer months, Summit High Adventure Base offers canoeing, backpacking, kayaking and rock-climbing treks. 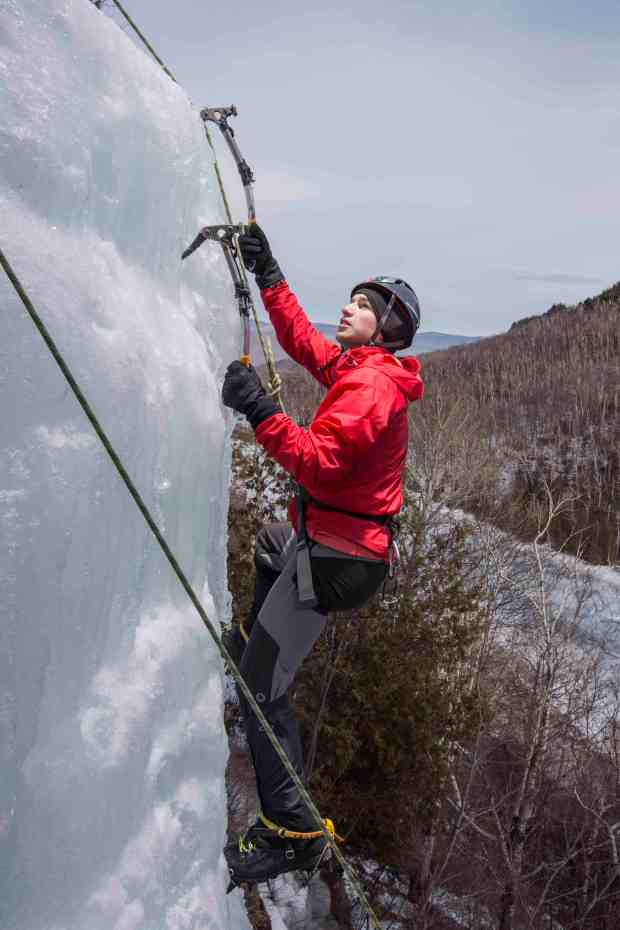