A couple of feet of ice and temps in the teens can’t stop these Venturers from scuba diving. 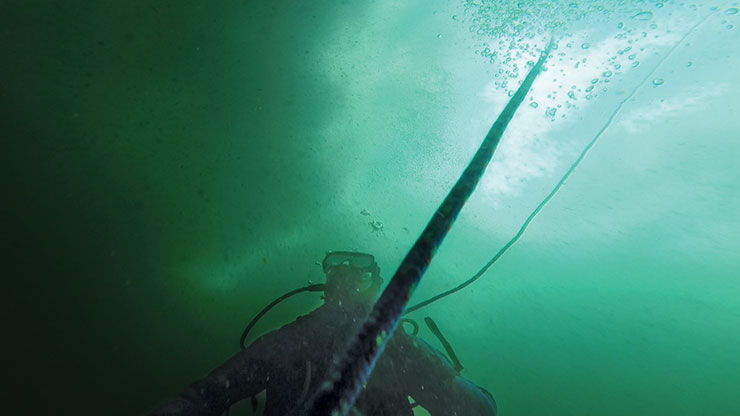 It’s 14 degrees outside, there are 24 inches of ice covering Square Lake and the Venturers from Crew 820 in Minneapolis, Minnesota, are ready to go scuba diving.

What else are you going to do when it gets this cold? Stay inside by the fireplace?

The guys in Crew 820 are divers. They dive in the spring, summer and fall. Most of them have never dived in the winter before. Until now.

Going underwater will be two instructors, three dive masters and seven divers. Providing support on top of the ice will be one instructor, one dive master and six more Venturers.

Hey, nobody said this was going to be easy.

Scuba diving under the ice reveals a whole new world different from that of warm-weather diving, even if you’re in the same location. When there are 2 feet of ice on the surface, there are no waves. All of the matter that you normally see suspended in the water during the warm months sinks to the bottom.

Much of the vegetation goes dormant and also sinks to the bottom.

The result is 50 feet of crystal-clear visibility.

But the most amazing aspect of diving under the ice is what you see when you look up.

Several hours of preparation go into a standard ice dive.

“It’s a big deal just to get down into the water,” says Venturer Christopher Kopp.

First, they drive their cars out onto the lake (yes, you can do that when the ice is 24 inches thick) to a popular diving spot. The water is 20 feet deep and just begging to be explored.

The adults use a heavy-duty chainsaw to cut a triangle-shaped hole, about 4 feet long on each side, into the ice. Then the crew shovels the excess snow and ice away from the hole and pours water over the ice to create about a 400-square-foot area in which light can make it through the ice and into the water below.

To stay somewhat warm underwater (where it’s about 34 degrees), ice divers wear wetsuits or dry suits. A wetsuit works by keeping the water close to your skin so your body can warm it up.

Under a dry suit, divers wear a layer (or two) of thermal underwear and a fleece middle layer. On top of it all goes a suit that, if used correctly, does an incredible job of keeping all that icy water at a safe distance.

“It’s like being in a plastic bag,” Christopher says. “As you go down, it compresses on you.”

The divers enter the water three at a time — one instructor and two Venturers. The first thing they notice is not the cold, but instead the surreal feeling of diving with a solid sheet of ice above you.

“That was definitely the strangest and the most difficult part,” says Venturer Jeff Clinton. “When you look down, it doesn’t feel all that much different other than it being colder. But when you look up, it feels totally different. It’s hard to describe.”

If you get lost underwater in warm weather, you can always swim to the surface and figure out where you are. If you get disoriented with a 24-inch-thick sheet of ice above you, there is no way out.

“It’s like being in a giant warehouse,” Christopher says. “And it’s pretty easy to lose track of the door.”

But Christopher and the other Scouts are tethered to the surface the entire time by a 65-foot line. Safety rules are covered during the pre-dive briefing, and if there is a problem underwater, a diver can simply tug twice on the line, and the surface support person will pull him to safety.

One of the neatest things to do under the ice is to “stand” upside down on the surface of the lake. Your head is down and your feet are up, but since your body wants to float, the blood doesn’t rush to your head as it would if you tried the same trick above the water.

You can stand upside down under the water and completely forget you’re upside down, except that when you breathe, your air bubbles drop to your feet instead of float above your head.

Just for fun, crew members lowered a Christmas tree under the ice and attempted to decorate it.

About 20 to 30 minutes is plenty of time to spend under the water while ice diving. Dry suits and wetsuits are great, but they can’t perform miracles. Eventually, you get cold.

“Once you’re out of the water, the cold really hits,” Jeff says. “I was definitely looking forward to getting into the tent and getting some warm clothes on.”

As soon as the diver exits the water, everything freezes instantly. Hot water is constantly poured
over the dive equipment to keep it operating properly.

It’s a lot of work for such a short time under the water, but for each of the guys, it was well worth it. If warm-water scuba diving is like exploring a whole new world, ice diving is like a completely different universe.
“You can dive in warm weather in 50 different places,” Jeff says, “but none of it will be a totally different experience like you get from ice diving.”

2 Comments on Scuba On Ice! Venturers scuba diving under the ice