Brighten up the Great American Eclipse with these 15 funny jokes sent in by Boys’ Life readers. These totally funny solar eclipse jokes will guarantee your humor won’t be overshadowed on Aug. 21.

Do you know a funny solar eclipse joke? Click here to send in your joke. 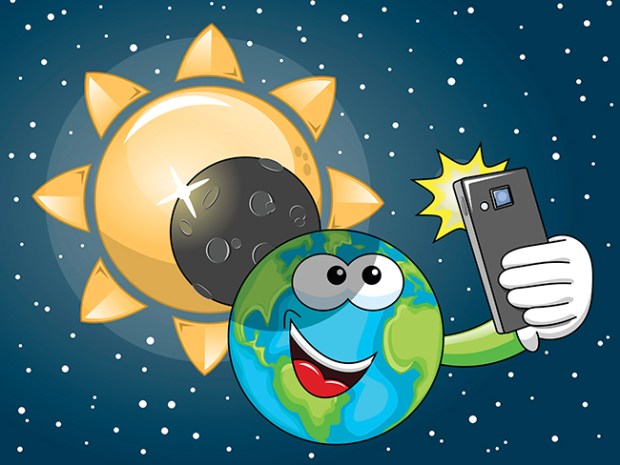 Max: What did the sun bring to the solar eclipse party?
Paul: Tell me.
Max: A light snack!
Joke by Max C., Trussville, Ala.

Austin: How does the man in the moon cut his hair?
Jaime: How?
Austin: Eclipse it.
Joke by Austin G., Baltimore, Md.

Wyatt: How did the ocean say hello to the sun after the eclipse?
Cody: I haven’t a clue.
Wyatt: It waved.
Joke by Wyatt P., Sumerduck, Va.

Walker: What did the sun say to the moon on the day of the solar eclipse?
Ben: I don’t know. What?
Walker: “Looks like it’s my night off.”
Joke by Walker G., Madison, Miss.

Ian: What did the sun say when it reappeared after an eclipse?
Angus: What?
Ian: “Pleased to heat you again.”
Joke by Ian T., Acton, Mass.

Liam: What kind of underwear should you wear during an eclipse?
Jesse: No clue.
Liam: Fruit of the Moon!
Joke by Carrington C., Richmond, Va.

Oliver: When can astronauts not land on the moon?
David: When?
Oliver: When it is full.
Joke by Oliver D., Flower Mound, Tex.

John: How do you organize a solar eclipse party?
Tim: How?
John: You planet.
Joke by John M., Norwood, Mass.

Buster: What’s the most famous painting of an eclipse?
Sonya: What?
Buster: The Moona Lisa.
Joke by Sergio H., Humble, Tex.

Liz: Why didn’t the sun go to college?
John: I don’t know?
Liz: Because it already had a million degrees!
Joke by Liz W., Margate, Fla.

Nathan: What did the scientists conclude when they found bones on the moon?
Nick: Not sure.
Nathan: The cow didn’t make it!
Joke by Nathan C., Redwood City, Calif.

Rushabh: Have you heard about the restaurant on the moon?
Tommy: No.
Rushabh: Great food, but no atmosphere.
Joke by Rushabh S., East Windsor, N.J.

Jacob: Why did the teacher bring solar eclipse glasses to school?
Leonard: Why?
Jacob: She had bright students!
Joke by Jacob B., South Bend, Ind.

Do you know a funny solar eclipse joke? Click here to send us your jokes.