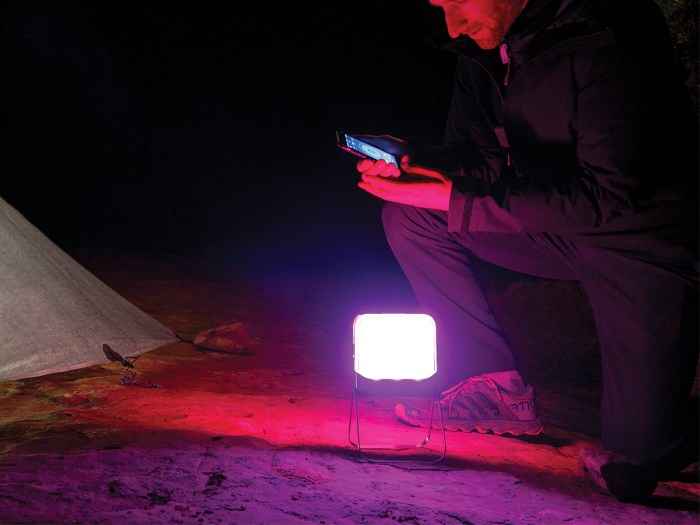 Keep your campsite bright at night with these great camping lanterns and lighting devices.

Described by its maker as the world’s first flatpack lantern, the ultra-packable BIOLITE BASE LANTERN XL ($130) produces 500 lumens, enough light to brighten a spacious campsite. It pairs with a Bluetooth app to open up a host of features like proximity activation, dimming and sleep timers. The two collapsible stainless steel legs give it stability in a variety of situations. Its powerful battery recharges via USB at home or with BioLite solar panels (sold separately), and it will charge four smartphones. And it’s just a bit larger than a deck of cards. 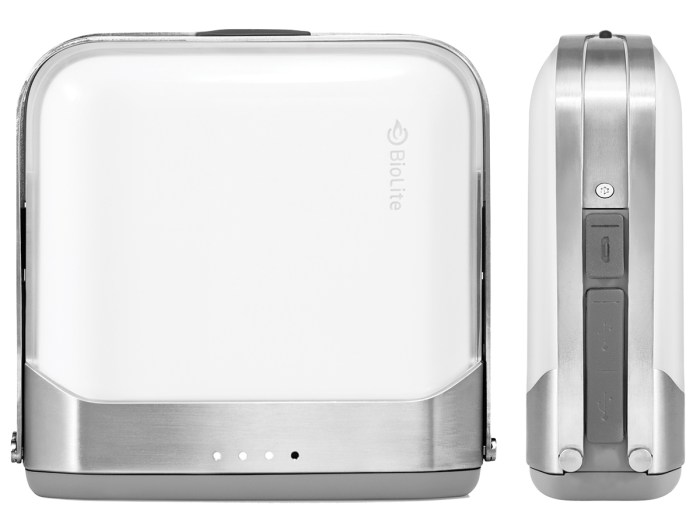 Any chance your light will land in water? Check out STREAMLIGHT’S THE SIEGE LANTERN ($65). It’s waterproof in up to a meter of water — and it floats, thanks to a polymer housing. The rubberized base keeps it from sliding on slippery surfaces. A powerful 540 lumens at the highest of three white LED brightness levels, it lights up a large campsite area and runs for up to 30 hours on high power using three D batteries. The red LED mode includes a flashing SOS signal that will last for 430 hours. It hangs from a D-ring or stands on its flat base. Plus, its USB output charges up to four standard smartphones. 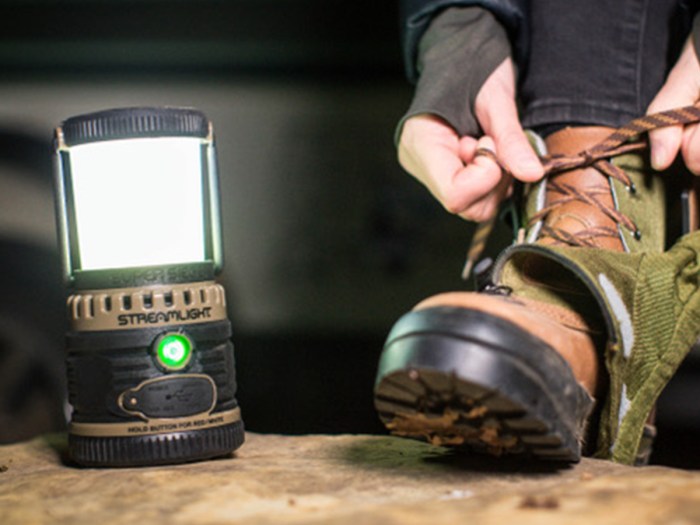 The POWER PRACTICAL LUMINOODLE LIGHT ROPE shows that camp lighting can be fun. The waterproof, flexible LED strip can be hung, strung, wrapped around or attached to virtually anything, and it simply plugs into a USB battery pack. The 5-foot-long model ($20) emits 180 lumens and the 10-foot version ($30) emits a bright 360 lumens. Hang it from an awning or around a tent like holiday lights. Stuff it inside its white stuff sack, and it functions like a lantern. 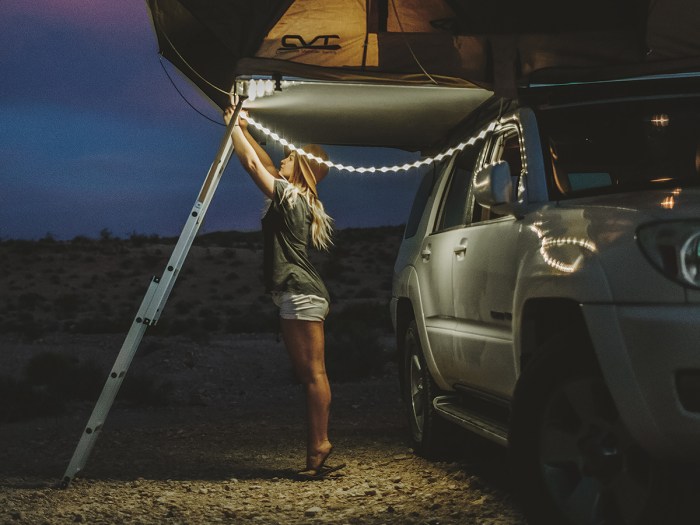 For its versatile design, ease of use, durability and brightness, it’s hard to beat the rechargeable BLACK DIAMOND APOLLO LANTERN ($65). Projecting 250 lumens, it illuminates a campsite well enough for nearly any task. It also has a diffuser to soften the light, plus dimming and strobe functions. It will hang from dual metal hooks on its top end or stand on three collapsible legs with rubberized tips that won’t scratch surfaces. Its USB port charges a smartphone, and it can also run on three AA alkaline batteries. 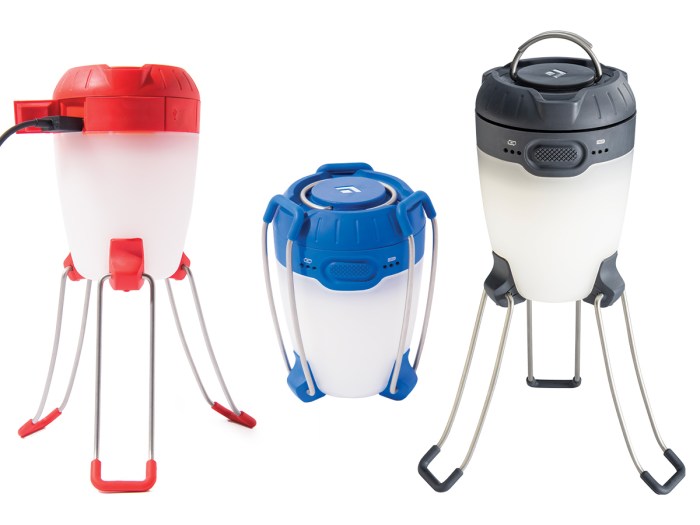 The waterproof, hands-free PRINCETON TEC VIZZ ($53) offers a maximum brightness of 420 lumens, unusually powerful for an ultralight headlamp. It has three dimmable modes, is simple to operate and is compatible with lithium batteries. Its lockout feature prevents you from accidentally turning it on. A good choice for backpackers, climbers, trail runners and backcountry skiers, the Vizz delivers good value if you’re seeking versatility, low weight, less bulk and supreme brightness. 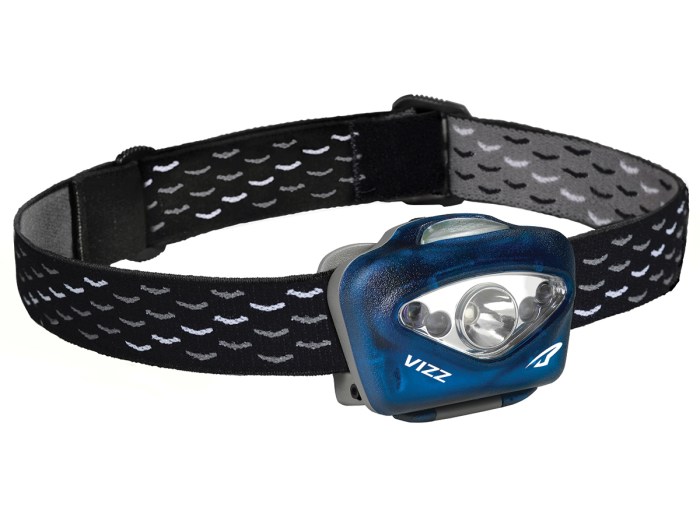 Smaller than a smartphone, the BLACK DIAMOND ZIP LANTERN ($30) emits 150 lumens as a lantern or 100 lumens as a focused flashlight. That’s bright enough to light up a tent or an entire camp dining area, and light and compact enough for backpacking. Powered by four AAA batteries, it stands upright or hangs from a rubberized metal hook. 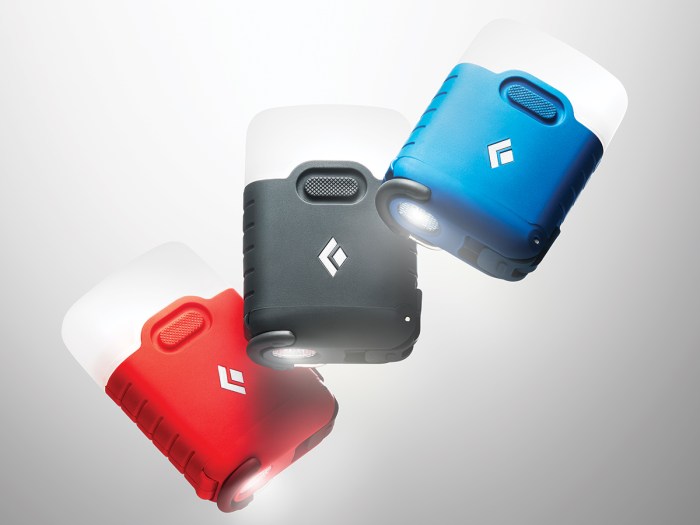 Stop throwing away batteries while using an inferior light — step up to the GOAL ZERO LIGHTHOUSE 400 LANTERN AND POWER HUB ($70, scoutshop.org). This LED lantern recharges from a USB outlet in five hours, using solar panels (sold separately) or even using its hand crank, which delivers 10 minutes of power for every minute of cranking. The USB output will charge a smartphone or boost the charge on a tablet. The smart design features two collapsible legs that fold up, while a built-in handle lets you easily carry or hang it. 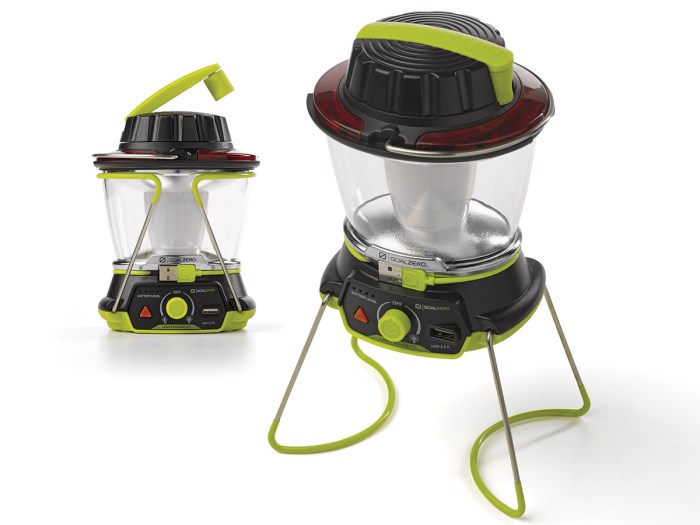 2 Comments on 7 Great Gadgets for Lighting Up Your Campsite